You might be thinking what does sitting in a chair haft to do with an ocean’s reefs? I would be thinking the same thing if I had not made the connection personally on my last adventure out snorkeling.

A little back story:

Last year in the middle of April 2018 Kauai received 50 inches of rain in 24 hours that devastated the island. The north shore communities of Wainiha and Haena were cut off from the rest of the island due to countless mudslides that covered the only two lane road in or out of these communities. It took over a year to repair the road to a safety standard that would allow all non Wainiha and Haena residents to re-enter the area. 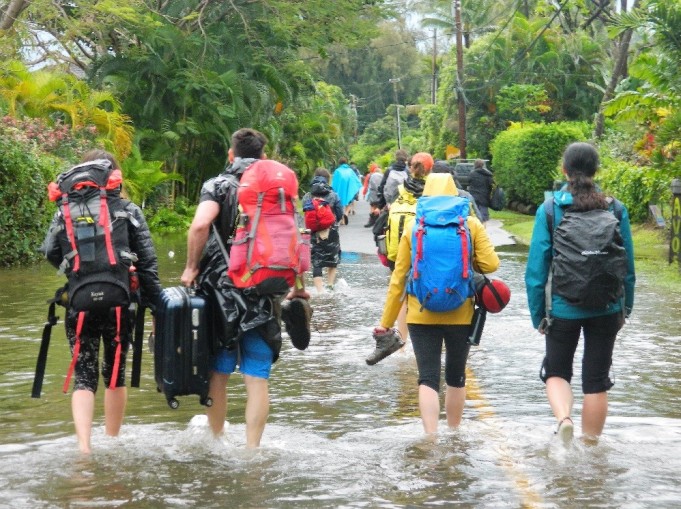 During this one year period the only folks allowed in and out of the above mentioned communities while massive road repair was taking place were the full time residents. As a full time resident living in Haena I saw with my own eyes the land transform.

Myself and many of the locals had an opportunity of a lifetime to spend time on the secluded and empty beaches. We began to see the fish returning, turtles nesting that had not been there since folks could remember and the reefs were coming alive again.

This is when I began my regular snorkeling adventures!

During this time I continued teaching and practicing YogAlign – pain-free yoga from your inner core. I began realizing much of my movements in the water reflected my movements in YogAlign. Not to mention breathing through the snorkel replicated the SIP breath in my practice. Like snorkeling a full body activity we too in YogAlign engage the entire body in practice and view the body as a whole.

The primary muscle groups engaged while snorkeling include:

A fair amount of flexibility in the ankle region as well as the ability to point the toes like a dancer is necessary (if you prefer to avoid leg and foot cramps).

A  strong core (abdominal, Oblique and back muscles) help to create a stable platform for legs to kick as well as a balance in your front and back leg strength.

Here is were the sitting in a chair comes in as none of the above mentioned muscle groups are engaged during sitting – it is quite the opposite. (the average American spends 7.7 hours a day sitting)

Having said that you take an average person who sits 7.7 hours a day in a chair and he or she decides one day to go snorkeling chances are the ocean reefs (fragile underwater ecosystem) and themselves are going to suffer.

How because he or she would be expecting their bodies to preform in a way it is incapable of preforming. The primary muscle groups that need to be engaged while snorkeling have amnesia from sitting. Flexibility in the ankles and pointing of the toes  would be limited – due to the shortening and tightening of the front line while sitting. Their core would be void creating an unstable platform for their legs to kick not to mention the unbalance between the back and front leg muscles.

How does all of this effect the oceans reefs?

On my last snorkeling adventure I realized I had gained greater endurance, strength and stamina (all supported by my regular YogAlign practice). However when I looked all around me as far as my eye could see people were STANDING ON THE REEFS! Why? Because they were tired and or had leg/ foot cramps and difficulty breathing (and yes I asked).

I swam up and said do you realize you are standing on a fragile underwater ecosystem that has had a years gift to repair itself from the endless years of damage it has received? Usually the response was I was so tired I could not get back to shore or I was having trouble breathing and got a leg cramp. lol

I encourage everyone to get out and get moving including snorkeling however, not at the sake of our ocean reefs (fragile underwater ecosystems) or their safety. #getupstandupforyourlife

See you on the mat!